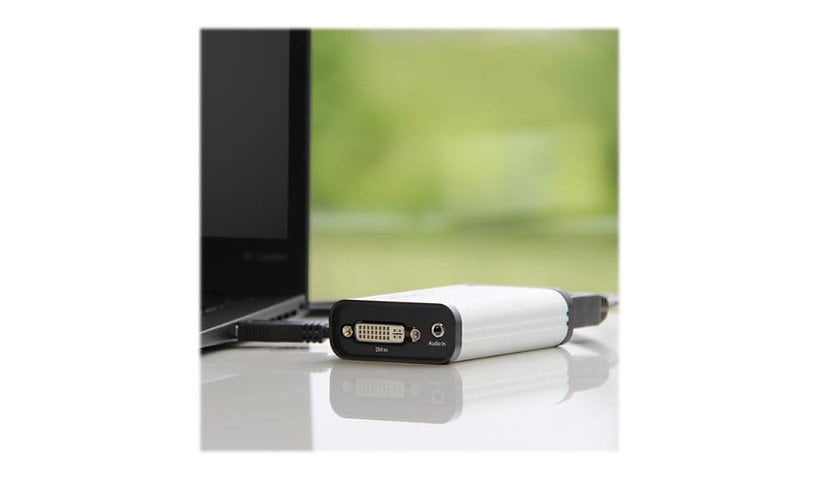 Record DVI video to your computer, and embed a 3.5mm audio source, at 1080p 60fps resolution. This DVI to USB 3.0 video capture device records high-definition DVI video to your computer. With an aluminum enclosure, this device is built strong for fixed-location or on-the-go capture. It offers a separate 3.5 mm audio input for accompanying audio or voice-overs, and a DVI pass-through port for connecting a monitor to review the video as it's captured.

Record 1080p video at 60fps (frames per second), to save your content so it can be shared, stored, or edited. Capture from security equipment, control rooms, medical, or other industrial DVI devices, directly to your computer.

On Windows, you can live broadcast your video over the internet, using Twitch or other third-party video streaming platforms, with the included software.

With this capture device, you're not tied to the included software. You can record raw/lossless video using any third-party DirectShow compatible software, such as Open Broadcaster Software (OBS).

This versatile DVI capture device works with HDMI to DVI and VGA to DVI adapters, so you can record video from an HDMI or VGA source.

The USB32DVCAPRO is backed by a 2-year StarTech.com warranty and free lifetime technical support.