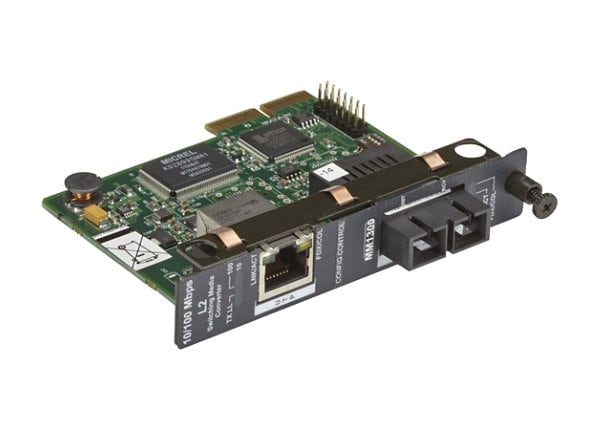 The 10BASE-T/100BASE-TX to 100BASE-FX module featured here has an autosensing 10/100 copper port and a 100-Mbps fiber port. It's a good choice for remote Fast Ethernet connections to Ethernet devices that may later be upgraded to Fast Ethernet.

This High-Density Media Converter System II Layer 2 Module belongs to a large family of modular media converter and communications options that provide an exceptional range of choices for your managed enterprise network. <br> <br> The High-Density Media Converter System II is particularly well suited for network-extension applications, offering a wide range of hot-swappable media converter modules for network extension over fiber. Additionally, the system offers a range of modules such as T1/E1, VDSL, and ATM that are not usually available with chassis-based media converter systems.

With more than 100 modules to choose from, this system can adapt to even the most demanding network configurations. All media converter modules are hot-swappable. You never need to power down a chassis to change a module.

Unlike Layer 1 media converters, which only convert one Ethernet media type to another, Layer 2 modules for the High-Density Media Converter System II are true switches. They actively store, filter, and forward Ethernet packets like any other MAC-layer switch.

Twisted-pair ports feature autocrossover ports to eliminate the worry of whether to use straight- or cross-pinned cabling. This built-in MDI/MDI-X function automatically determines whether the converter has to cross over between the four pairs on the twisted-pair port's RJ-45 connector.

This module has LinkLoss&#8482;, which notifies you of "silent failures" on copper-to-fiber links. LinkLoss enables you to troubleshoot network problems just by looking at the media converter's Link LED&#8212;the link status of the fiber segment will always be reflected by the twisted-pair segment so you're informed quickly of fiber problems. The module also features link fault pass-through (LFPT).

The Configuration Control feature retains the latest configuration regardless of whether it was set using DIP switches or SNMP.