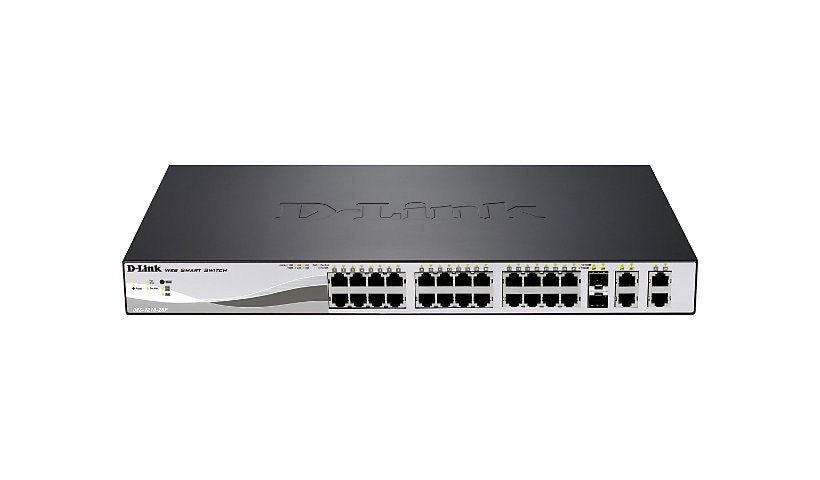 The DES-1210-28P is the first PoE switch in the Fast Ethernet Smart III series. Equipped with 24 Fast Ethernet ports, 2 Gigabit ports and 2 additional Gigabit copper/fiber combo ports, this switch integrates the features of the successful Smart III series with PoE and the PoE+ functionality. With an easy to use web interface and eco-friendly design, the DES-1210-28P helps customers to quickly and easily deploy their networks, saving energy and money.

The DES-1210-28P is the ideal solution as an advanced edge switch for SMB and enterprise networks. The 4 additional Gigabit ports allow for fast and reliable copper or fiber uplinks to the rest of the infrastructure. The Asymmetric VLAN support will provide access to shared resources such as servers or the Internet, without complicated VLAN configurations. Additionally, the innovative AutoVoice VLAN feature allows for easy integration of 3rd party IP phones, placing VoIP traffic in a separate VLAN, thus ensuring the quality and security of VoIP traffic.

The DES-1210-28P complies with the 802.3af PoE standard, and the recently ratified, high-power 802.3at standard. This gives you extra flexibility at deploying appliances such as wireless Access Points, IP cameras and VoIP phones in your network, even in mix-vendor environments. For added flexibility and power-saving, the DES-1210-28P integrates the Time-Based PoE feature, which turns off the power when it is not needed, for example, at nights or during the weekends. This means that PoE-powered devices which otherwise would be always on, can be switched off centrally, saving power and money.