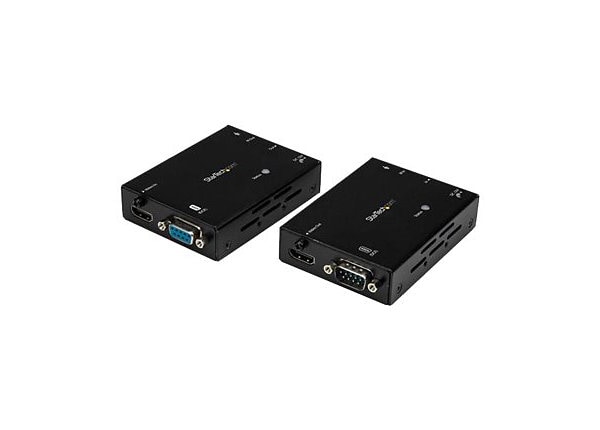 Extend video and more with HDBaseT

The extender offers a complete end-to-end video and control solution, using HDBaseT technology to extend not just HDMI, but also DC power, IR and serial control over a single CAT5 cable. By extending so much over just one CAT5 or CAT6 cable, HDBaseT is the clear choice of every integrator and system designer.

The added benefit of power over cable means that you'll only need one power source at one side of your extension - great for extending video and control to areas where power outlets may be limited, such as industrial sites.

Serial and IR extension optimizes operation by enabling you to control the video source or display from both the local and remote location.

This HDBaseT extender has been certified via the HDBaseT Certification Program. This certification ensures the extender is compliant with HDBaseT technical standards, and maximizes reliability with your HDMI display and video source, by ensuring compliance with their established HDMI ecosystem.

With the A/V industry adopting 4K as the new high-resolution video standard, long-range video distribution can be a challenge over standard HDMI cables that become susceptible to signal degradation at 30 feet. This HDBaseT extender can maintain your Ultra HD 4K picture quality - four times the resolution of high-definition 1080p - even at 330 feet away from your video source. Plus, because the extender supports high-definition 1080p and lower resolutions, you can comfortably use this extender to make any video source look great, while future-proofing your setup for 4K implementation.

HDBaseT technology offers a single-cable installation, so you can integrate this solution seamlessly using your existing CAT5e or CAT6 infrastructure. Both the transmitter and receiver included with this HDBaseT extender kit are mountable, so you can keep the equipment out of sight in an equipment rack, or on a wall. This helps to reduce clutter and ensure a professional installation that doesn't draw your viewers' attention away from the content on your display. It's perfect for customer-facing displays in bars, restaurants or hotel lobbies.

HDBaseT is a standardized, zero-latency video technology that's revolutionizing HDMI distribution. HDBaseT uses an advanced method of modulation that enables you to distribute uncompressed HDMI audio and video, along with additional signals, over a single Ethernet cable.

Offering greater versatility than traditional HDMI extenders, and longer distances than HDMI cables alone, HDBaseT is the clear choice for every integrator and system designer. It can do so much, with just a single cable.

The ST121HDBTL is TAA compliant and backed by a 2-year StarTech.com warranty with free lifetime technical support.