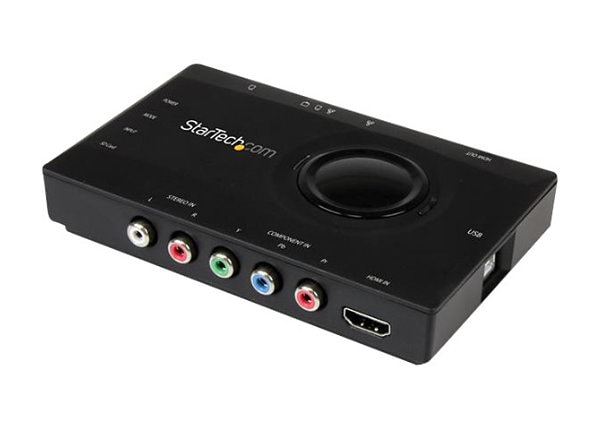 Main Features
Capture high-definition video to a PC, or to an SD card without a computer, and stream live video over the Internet in real time. This high-definition capture device lets you record an HDMI or component video source, with audio, through a USB port on your computer.

With two standalone modes for recording or streaming, the capture device lets you record directly to an SD card for standalone capture, or use the built-in LAN port to stream video over the Internet.

This versatile capture device features an SD card slot, which lets you record video directly to a card without having to connect the capture device to your computer. It's the perfect way to save time, while adding support for non-Windows based platforms such as Mac computers or Android tablets. Software is also included enabling you to stream or record content with your Windows based computer.

For hassle-free video streaming, the capture box also has a built-in RJ45 network port that enables you to connect the capture device directly to your router or switch. With this standalone network connectivity you can instantly stream your video source over the Internet using streaming services such as Twitch .

The device encodes in H.264, the most widely adopted video codec in the world, so you can rest assured that your video captures will be compatible with almost any device platform with no editing or converting required. H.264 is also widely supported by most software titles including Adobe Premiere and Windows Media Encoder.

Plus, the included software lets you take screenshots, schedule recordings and instantly stream your video source over the Internet. The software is compatible with NTSC and PAL systems, which is perfect for professional video archiving applications where source media can change from project to project.

To maximize portability, the capture device is USB powered, so you don't have to use an additional power adapter or find an available wall outlet.