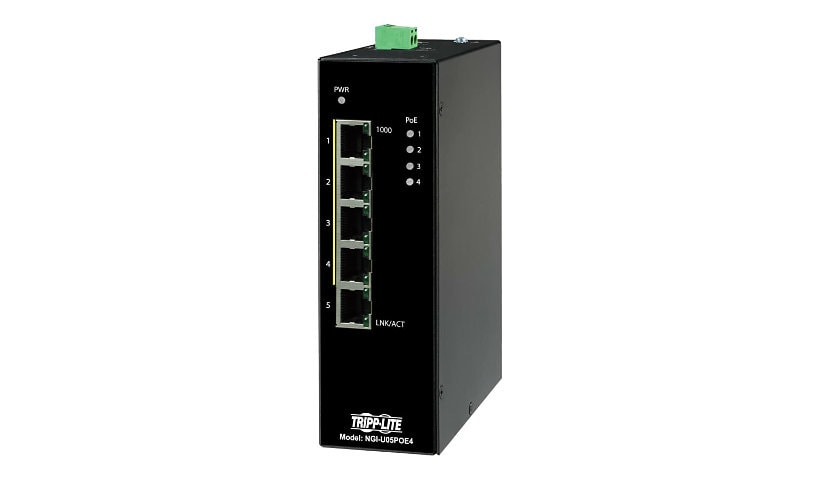 This Tripp Lite network switch connects devices, such as computers, printers and servers, to a local area network (LAN) and allows them to communicate over the network. Five auto-negotiating 10/100/1000 Mbps ports send data only to the devices designated to receive it, which improves the efficiency and potential throughput of the network.

Especially recommended for security applications to power IP cameras, VoIP phones and other PoE-compatible devices, this unmanaged switch features four PoE (Power over Ethernet) ports. The NGI-U05POE4 provides PoE+ compatibility with wireless access points and other devices with up to 30W per PoE port and a PoE budget of 120W.

The NGI-U05POE4 adds Gigabit Ethernet capacity to your industrial and commercial applications, such as factories, construction sites, supply rooms and warehouses. You can share large bandwidth-intensive files, such as CAD drawings and videos, improving efficiency and cutting costly downtime. The industrial-grade switch with its rugged high-strength case withstands vibration, shock and free fall. It can also operate in extreme temperatures ranging from 14 degrees to 140 degrees Fahrenheit.

Because it is an unmanaged switch, the NGI-U05POE4 does not require configuration before use. LEDs indicate when the switch is powered on and which Ethernet ports are showing activity. The NGI-U05POE4 supports MAC address auto-learning and auto-aging for efficient routing, as well as automatic MDI/MDI-X crossover detection for plug-and-play functionality. IEEE 802.3x flow control allows smooth transmission of large files.

The device may be DIN mounted using the pre-installed rail clip, which mounts firmly to any standard 35 mm DIN rail. A 2-pin 24– 57VDC terminal block or 4-pin Mini-DIN connector supplies power input. Device power must be supplied by SELV circuit.