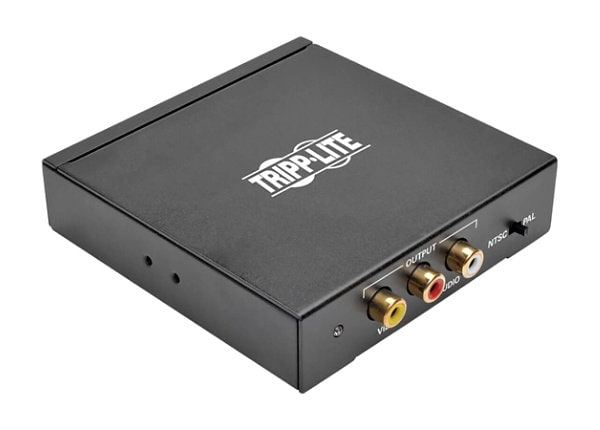 Main Features
The P130-000-COMP HDMI to Composite Video with Audio Converter connects an HDMI source, such as a Blu-ray player, to a television or monitor equipped with RCA composite video connectors. With a female HDMI input port and female RCA composite video (yellow) and stereo audio (red/white) output ports, this converter lets you watch movies and play games on your existing analog display instead of buying a new HDMI monitor or television.

The P130-000-COMP is compliant with both NTSC and PAL video formats. It supports video output resolutions up to 480i (NTSC) and 576i (PAL), and is HDCP compliant. It supports input video resolutions of 480i, 480p, 576i, 576p, 720p, 1080i and 1080p (50 & 60Hz). It also supports uncompressed right/left stereo audio. Plug and play with no software or drivers needed. Mounts to a wall or other surface with the included hardware. HDMI, RCA composite video and RCA audio cables sold separately.