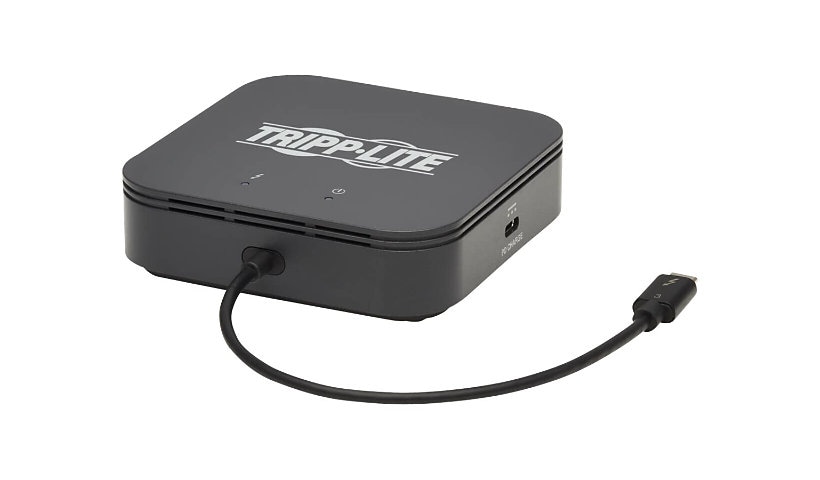 This Thunderbolt 3 docking station dramatically expands the potential of your MacBook Pro or Windows laptop by adding seven ports to its Thunderbolt 3 port. Not only does the MTB3-DOCK-04 allow you to transmit 8K video to a DisplayPort monitor and 4K video to an HDMI monitor at the same time, you can also add USB peripherals, record a podcast, connect to a Gigabit Ethernet network, and charge your host device.

By connecting the built-in Thunderbolt 3 cable to a source device that supports DisplayPort Alt Mode, you can output 8K/4K video and digital audio to a compatible monitor, television or projector without installing special software drivers.

The Thunderbolt 3 cable supports bidirectional speeds up to 40 Gbps, which is eight times faster than USB 3.0, four times faster than Thunderbolt 1 and twice as fast as Thunderbolt 2. With dual 20 Gbps channels moving data both directions at the same time, the MTB3-DOCK-04 is perfectly suited for video streaming and editing on two monitors, as well as transferring large RAW video or CAD files.

By connecting to a source that supports DisplayPort MST Mode, you may connect one DisplayPort monitor and one HDMI monitor simultaneously at resolutions of 8K (7680 x 4320 at 30 Hz) and 4K (3840 x 2160 at 60 Hz as specified in HDMI 2.0), respectively. This allows you to display the same image on both monitors, extend your host desktop across both with different windows open on each, or combine both into one large display as a video wall.

The USB-C Power Delivery port provides power output up to 20V 3A (60W), which is sufficient for charging and powering the connected source device, such as a MacBook or Chromebook. Connect the port to the device's AC wall charger.

Two USB-A hub ports accept USB peripherals, such as flash drives, mice, keyboards, external hard drives and printers. When the USB-C PD port (see above) is powering the dock, both USB-A ports support lightning-fast USB 3.1 Gen 2 data transfer rates up to 10 Gbps. When using bus-powered mode, one port supports 10 Gbps, and the other supports USB 2.0 speeds on a first-come, first-serve basis. Both are backward compatible with previous USB generations.

The RJ45 port offers access to a Gigabit Ethernet network when no Wi-Fi is available or when a wired connection offers faster speeds. Connect using a UTP cable (sold separately), and enjoy true 10/100/1000 Mbps Ethernet speeds for fast data transfers.

This Thunderbolt 3 docking station contains one 3.5 mm mini stereo jack, convenient for connecting speakers, headphones or a microphone to your workstation. You can listen to music or record the latest episode of your podcast.

Unlike traditional USB cables that connect in only one direction, the reversible Thunderbolt 3 male connector plugs into its port in either direction for an instant connection every time.