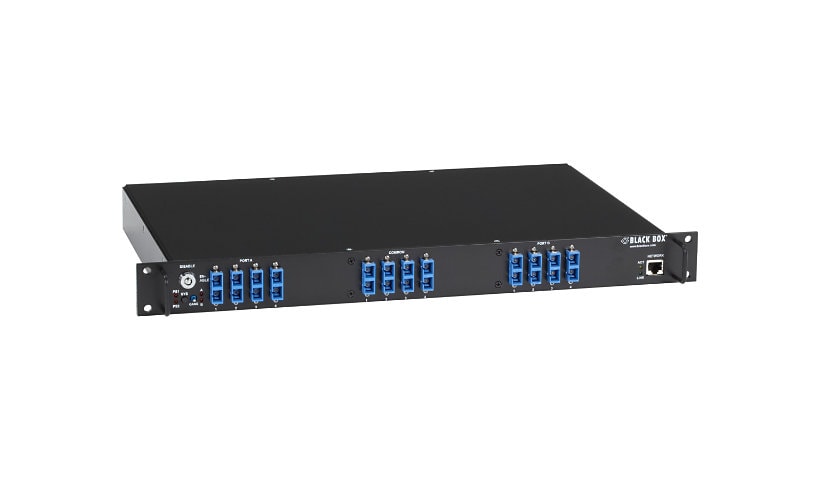 With the Pro Switching System 1 U NBS, it's very simple to switch all users from a main network to a backup network. Locally, this is done using a momentary toggle switch on the chassis' front or from a serial RS-232 workstation. But it also supports control from a remote workstation via its 10BASE-T Ethernet port. Through this TCP/IP connection, you can switch and monitor circuits using Telnet, SNMP, or a Web browser link.

The switching system also features auto bypass and auto recovery functions. If the "normal" network paths between the chassis and the device being monitored go down for any reason, the chassis will automatically switch from the normal connection state to the bypass, or failover, connection state.

Unique latching optical switch mechanisms and micro-mirrors optically route signals between ports. And because the system is fiber based, there's no need to worry about EMI/RFI interfering with signaling in electronically noisy applications.

The system uses duplex SC connections for each channel (port) to form bidirectional data paths to your multimode network segments. Simply connect fiber cables between the system's circuits and the network connections you want to control. As soon as the fiber cables are plugged into the chassis, the selected data paths become active.

Each switching circuit has a common (C) port that's latched to its associated A or B port, which means it transmits signals even if the chassis is without AC power. Because its relays are physically latched into position, once a position is set, it stays set.

A key-lockable switch secures the gang switching function. With the key-lock switch in the enabled position, all ports in the Pro Switching System 1 U NBS can be simultaneously switched by pressing the momentary toggle switch on the chassis' front.