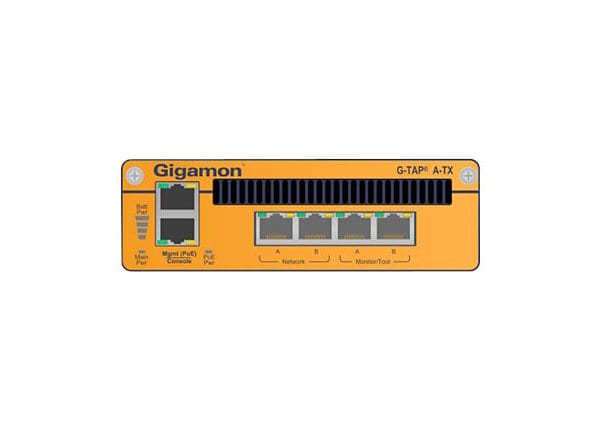 Main Features
The GigaTAP A Series is a line of network TAPs designed with the Gigamon "Always On" architecture. This one-of-a-kind architecture eliminates network link downtime on network connections through the use of up to four power sources, including alternating current (AC), direct current (DC), Power over Ethernet (PoE), and on-board battery backup. While using any of the primary forms of power (AC, DC, PoE), the unique design of G-TAP A Series constantly charges the integrated backup battery, which allows it to assume power load in the event of a primary power failure. This eliminates link downtime associated to link renegotiation on the network devices connected to the TAP.

The G-TAP A Series also provides intelligent management capabilities that monitor link states of connected devices and the power state of all sources of power. In the event that primary power is lost, SNMP traps alert users that the TAP is utilizing the backup battery. The SNMP traps are re-triggered as battery levels drop to ensure rapid alert and renewal of the primary power source, eliminating further network downtime. The G-TAP A Series' intelligent monitoring also offers an added level of network security to your network by providing SNMP trap alerts when existing links are removed or when new links are added. The G-TAP A Series 2 has the additional capabilities of being managed by GigaVUE-FM (along with other GigaVUE visibility nodes), secure CLI login via SSH, and SNMP version 3 for issuing trap notifications.