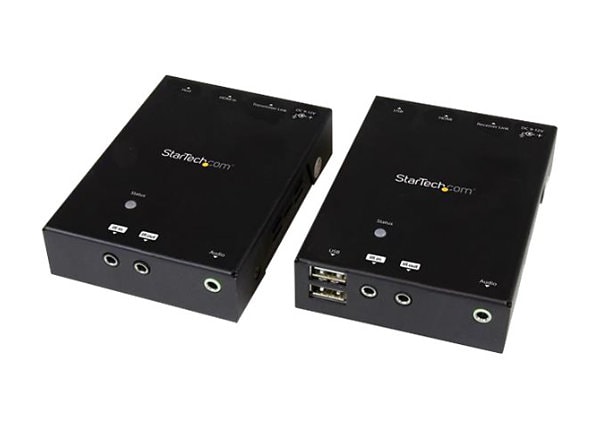 Main Features
Extend Ultra HD 4K video, an IR signal and four USB devices to a remote location, with power over cable. This HDMI extender kit uses HDBaseT 2.0 technology, enabling you to extend 4K HDMI video and four USB 2.0 peripheral devices to a remote location up to 295 feet (90 meters) away, using a single CAT5e or CAT6 cable. The extender can extend 1080p (HD) video even further at up to 330 feet (100 meters).

You can power both the transmitter and receiver using the same single power source, which you can connect to either the extender or receiver using Power Over Cable (POC). You can also connect up to four USB devices on the remote side and support 3D video and 7.1 digital audio. The versatility of this video extender makes it the perfect solution for digital signage applications in large buildings such as commercial shopping centers, stadiums, schools, and hospitals.

HDBaseT is a standardized, zero-latency video technology that's revolutionizing HDMI distribution. HDBaseT uses an advanced method of modulation that enables you to distribute uncompressed HDMI audio and video along with additional signals such as USB and power over cable.

The extender offers a complete end-to-end solution, using HDBaseT technology to extend HDMI, IR, power and USB over a single CAT5 cable. With power and USB along with your video signal, HDBaseT is the clear choice for every integrator and system designer. The added benefit of power over cable means that you'll only need one power source at one side of your extension, and USB lets you add a console at the remote location - great for extending video and control to areas where power outlets may be limited, such as industrial sites.

The A/V industry is quickly adopting 4K as the new high-resolution video standard. But long-range video distribution can be a challenge if you're using standard HDMI cables because the signal becomes susceptible to degradation at 30 feet. HDBaseT maintains your Ultra HD 4K picture quality - four times the resolution of high-definition 1080p - even at 330 feet away from your video source. Plus, because the extender supports high-definition 1080p and lower resolutions, you can comfortably use this extender to make any video source look great, while future proofing your setup for 4K implementation.

This extender has been specifically designed for a simple and tidy installation. HDBaseT technology offers single-cable installation, so you can integrate it seamlessly using your existing CAT5e or CAT6 infrastructure. This means that you can avoid the hassle of running multiple Ethernet cables, while reducing potential failure points.

The ST121HDBTU is backed by a 2-year StarTech.com warranty and free lifetime technical support.

HDBaseT is a registered trademark of The HDBaseT Alliance.