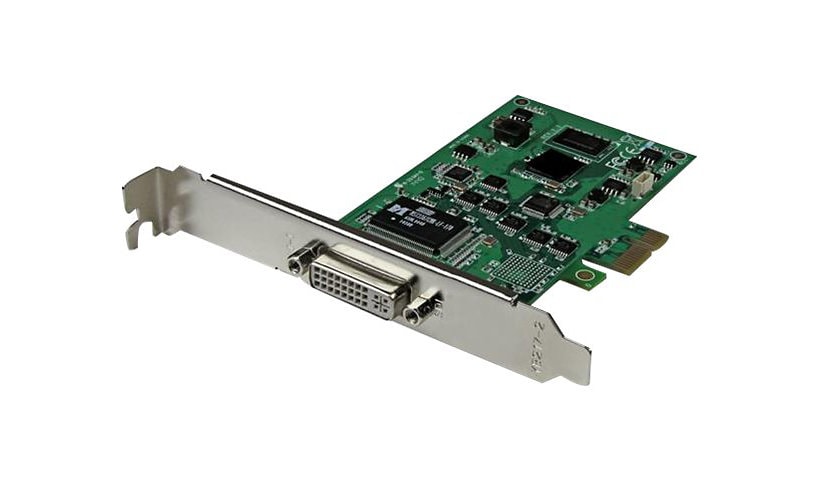 Capture an HD audio-video source, through a low-profile or full-profile PCI Express slot. This all-in-one PCI Express capture card lets you record 1080p HD video and stereo audio to your computer system. With multiple video inputs including HDMI, DVI, VGA and component, the capture card can record original content from various sources such as computers, camcorders, security systems, POS terminals, and servers. With H.264 encoding, this is the perfect solution for capturing high-definition video for editing, compiling, and archiving.

You can install the card into any low-profile or full-profile PCIe slot, including fixed workstations such as 2U or 4U rack-mounted servers or media centers. Installing your capture device internally through PCIe ensures a secure and reliable way to capture video.

You can capture the same quality delivered by your video source, by recording video in high-definition 1080p at 30 frames per second. Unlike some capture devices that can only record at low-resolution 480p, this capture card matches the output of most consumer A/V equipment.

Now, you can capture the output from your computer, server, or POS station when creating software training and tutorial videos, without having to put up with inferior video quality.

The software that's included with the capture card encodes in H.264 - the most widely adopted video codec in the world. Although the card is designed specifically for Windows computers, H.264 encoding ensures the video files you save will be compatible with almost any video player such as such the media software on your PC, Mac, iOS and Android devices, with no editing or converting required.

H.264 is also widely supported by most software titles including Adobe Premiere and Windows Media Encoder. Plus, the software not only lets you capture and export videos, but it also lets you take screenshots, schedule recordings and instantly stream your video source over the Internet using online services such as Twitch .

With multiple A/V input options, the capture card lets you record video from a wide variety of sources including HDMI, DVI, VGA, and component. You can also use this capture card with A/V adapters to record other video sources such as SDI using the SDI to HDMI converter (SDI2HD). Support for a variety of A/V devices is ideal for archiving analog video footage into a digital database.

The device also includes easy-to-use software that's compatible with NTSC and PAL systems, making it a must for professional video archiving applications where source media can change from project to project.

This capture card will not record digitally encrypted content.