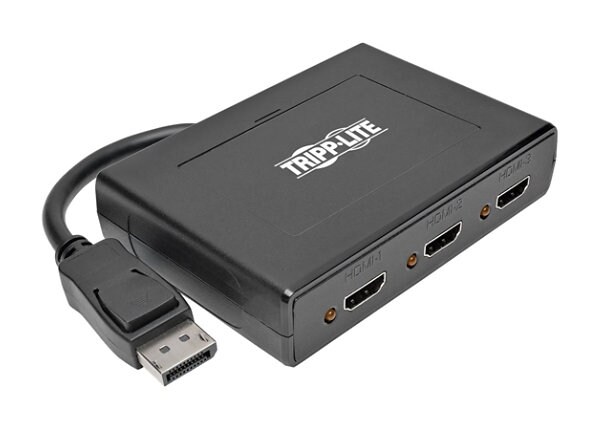 Main Features
The B156-003-HD-V2 3-Port DisplayPort 1.2 to HDMI MST Hub connects up to three HDMI monitors to the DisplayPort output on your computer. Ideal for digital signage in schools, churches, conference rooms, trade shows, hotels and retail outlets, this hub allows you to display the same image on all three monitors, extend the desktop across them, or combine all three as one large monitor in video wall mode.

This MST hub also supports HDCP, EDID, DDC and 48-bit Deep Color (16 bits per channel), as well as DTS-HD, Dolby TrueHD and 7.1-channel surround sound audio. It works with all operating systems. Plug-and-play convenience means no software or drivers are needed. A built-in six-inch cable connects directly to a DisplayPort source. LEDs indicate when the monitors are receiving a signal. The B156-003-HD-V2 complies with the Federal Trade Agreements Act (TAA) for GSA Schedule purchases.

MST compliant graphics cards are limited to a bandwidth of 21.6 Gbps amongst all monitors, with higher resolution monitors using up more bandwidth. 1080p monitors will use up approximately 22% of bandwidth, whereas 4K monitors will use 40% or more. As each monitor will be different, it is necessary to verify the percentage of bandwidth being used by each monitor in the display settings interface for your graphics card. If the total percentage of bandwidth taken up by all of the connected monitors exceeds 100%, an image will not display on one or more of them.