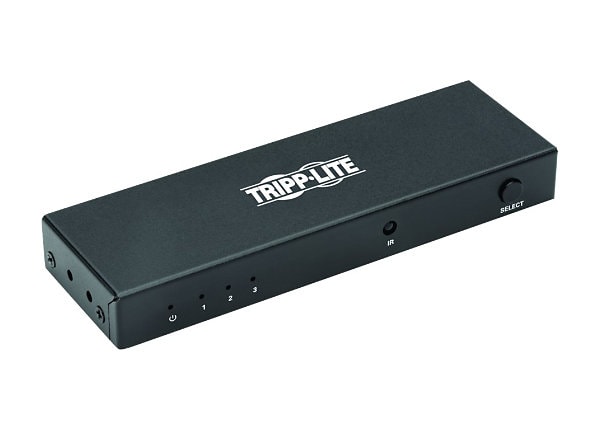 Main Features
This 4K HDMI switch allows you to connect three HDMI source devices to one port on an HDMI display and switch back and forth between them. For instance, you can connect a Blu-ray player, cable/satellite DVR and video game system to one HDMI port on a monitor, projector or TV. Or you can connect three computers or media centers to an HDMI display for exhibiting digital signage or giving presentations.

The B119-003-UHD is ideal for home entertainment systems, schools, point-of-sale displays, trade shows and anywhere else digital video is displayed. Connect up to three source devices to the HDMI input ports using HDMI cabling (sold separately), and plug the included external power supply into an AC power source. Another HDMI cable connects the HDMI output port to a monitor, projector or television. A red LED indicates the unit is receiving power, and blue LEDs indicate an HDMI signal is being received.

You can switch from one source device to another in one of three ways: the Select button on the unit, the included remote control, or RS-232 serial control. An RS-232 serial port connects a computer via DB9 cable (sold separately).

The plug-and-play 3-port HDMI switch with remote control comes in a durable metal housing and requires no software or drivers. It meets current 3D, EDID, HDCP 2.2 and HDMI 2.0 standards to ensure you can use the switch with the most up-to-date Blu-ray players and other components. It supports Ultra High Definition (UHD) video resolutions up to 4096 x 2160 (4K x 2K) at 60 Hz and 36-bit True Color (12 bits per channel), as well as 7.1-channel surround sound, DTS-HD, Dolby TrueHD, DSD (Direct Stream Digital) and HD (HBR) audio.

The B119-003-UHD comes with a one-year warranty. It's manufactured in compliance with strict RoHS specifications, reflecting Tripp Lite's commitment to environmental responsibility.