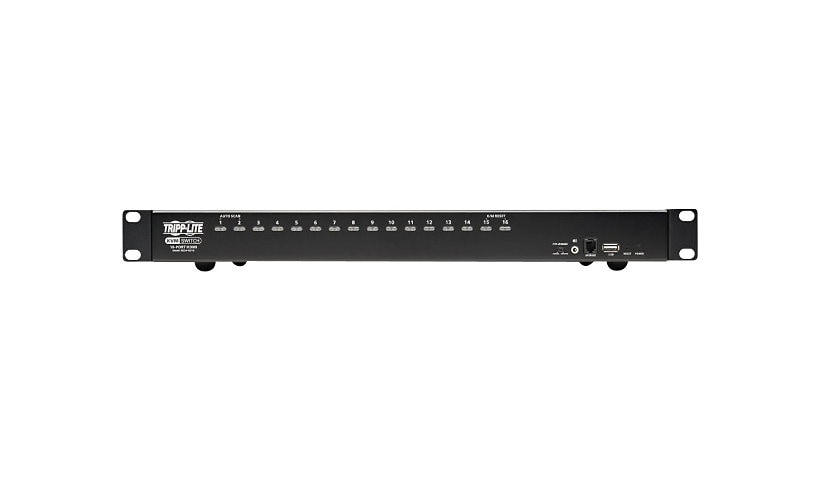 This rack-mount KVM switch lets you access, control, boot and reboot up to 16 computers or other devices with HDMI ports at the same time. In addition to desktop and notebook computers, the switch also connects up to 16 media centers, gaming systems, Blu-ray and DVD players, cable and satellite boxes and DVRs, and other HDMI-enabled devices. All 16 computers share one HDMI monitor, USB keyboard and USB mouse, which saves space on your desk or workspace.

You can also cascade up to three levels of B024-HU16 KVM switches, allowing centralized access to as many as 256 computers using a single monitor, keyboard and mouse.

Connect your HDMI monitor, keyboard, mouse, and speakers to the switch's console ports. Then, use the included HDMI and USB cables to connect your computers to the KVM switch. The plug-and-play B024-HU16 requires no drivers, so you can connect and use it immediately. It works with all major operating systems, including Windows, Mac and Linux.

The built-in two-port USB 2.0 hub allows you to share USB peripherals, such as printers, hard drives, scanners, webcams and flash drives, between all connected computers. Because the USB ports operate independently, you can print documents from one computer while working on a different computer. The hub is backward compatible with USB 1.1 devices. Green LEDs indicate which computer is using the connected USB device.

The B024-HU16 supports high-definition video resolutions up to 1920 x 1200 (including 1080p) at 60 Hz, 2.1-channel surround sound audio and USB 2.0 data transfer rates up to 480 Mbps. With independent audio switching, you can listen to music or other audio from one computer while working on a different computer. The front-panel audio jacks have priority over the rear-panel jacks.

Stack as many as eight B024-HU16 KVM switches to take advantage of multi-display mode. Depending on the number of stages in your stack, your installation may offer dual-display, triple-display, quad-display or multi-display scenarios, up to eight stages.

The heavy-duty metal housing comes with mounting hardware for 1U installation in an EIA-standard 19-inch rack. It also allows desktop deployment on included rubber feet that help prevent the unit from sliding. The included power supply connects to any standard AC power source.